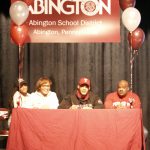 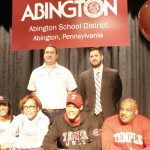 Today Abington Senior High School celebrated senior George Reid’s National Letter of Intent signing to play Division I Football at Temple University.  Abington football coach Kevin Conlin described George as a “team leader and hard worker, second to none;   George is always the first one at practices and the last to leave.”  In addition, he is an outstanding student with an excellent academic record.  Among his many achievements, George received the 2017 Maxwell Football Club’s “Mini Max” Award, was named to many local and state conference teams, and was a featured player in the “100 Players in 100 Days” report.

This past year George scored 31 catches for 642 yards and six touchdowns, four interceptions, and a fumble recovery for a touchdown.  In 2015 he was named the Number One Receiver among SE Montgomery and Upper Bucks County high schools.  Coach Conlin thanked George for his team leadership and accomplishments this year in Coach Conlin’s first year as head varsity football coach.

George’s teammates and fellow students cheered George as an excellent highlight video produced by Abington student Zion Miller was shown and as he signed the National Letter of Intent.

George is pictured here with his parents and sister and also with Coach Conlin and Abington Athletic Director Todd Vaccaro.