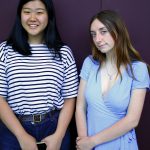 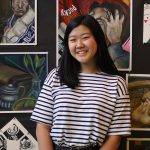 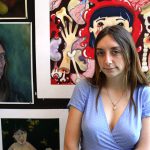 As the class of 2018 approaches the end of their high school careers and begins to prep for life after graduation, two Abington Senior High School seniors are celebrating their extremely challenging acceptances into one of the nation’s most selective and competitive art schools.

Yeji (Abby) Kim and Erin Touey earned themselves spots in the incoming freshman class at The Cooper Union for the Advancement of Science and Art — commonly called Cooper Union — located in New York City. The current incoming class has just 70 spots available, and even with only the most advanced high school art students applying for admission, the acceptance rate remains around a mere 13 percent. The application that Kim and Touey completed as part of the selection process included an at-home test of six visual problems, several portfolio reviews, as well as essay submissions.

“Because we are a strong art department, Abington gets a student into Cooper Union about once every five years,” said Abington Senior High School art teacher Richard Metz, who explained that many of the accepted students at Cooper Union are often from arts-specific high schools across the country. “To have two students accepted into this program is unheard of, and a first for Abington,” he continued.

Metz also explained that Kim and Touey have both taken three years of art during their Senior High School careers, in addition to enrolling in AP Studio Art during the 2017-2018 school year.